I write a sins not tragedies lyrics to take

Asa Nodelman created gothic horror puppet show The Clock in the Lobby for last year's fringe. Inspired by the success of that Best of Fest show — and by early 20th-century horror writer H. Lovecraft's references to a mysterious tome called The Necronomicon — Winnipeg's Nodelman follows that act with this big bang of a Biblical sci-fi chiller. A cast of 13 marionettes traces the occasionally gory misadventures of over-curious futuristic protagonist Abdolos Hazirinon, whose punishment for reading a forbidden cryptic text is cruel and unusual by any measure.

Gibbons later told a Musician magazine interviewer in that Knopfler had solicited Gibbons' help in replicating the tone, adding, "He didn't do a half-bad job, considering that I didn't tell him a thing!

Another factor in trying to recreate the sound was a wah-wah pedal which was turned on, just set to a certain position. Following the initial sessions in Montserratat which that particular guitar part was recorded, Neil Dorfsman attempted to recreate the sound during subsequent sessions at the Power Station in New York but was unsuccessful in doing so.

The recording contains a very recognisable hookin the form of the guitar riff that begins the song proper.

Money for Nothing (song) - Wikipedia

The guitar riff continues throughout the song, played in permutation during the verses, and played in full after each chorus. The song's extended overture was shortened for radio and music video. Lyrics[ edit ] Mark Knopfler described the writing of the song in a interview with critic Bill Flanagan: He's singing the song.

I wrote the song when I was actually in the store.

Panic! At The Disco - I Write Sins Not Tragedies Lyrics Meaning

I borrowed a bit of paper and started to write the song down in the store. I wanted to use a lot of the language that the real guy actually used when I heard him, because it was more real According to Knopfler, he was in New York and stopped by an appliance store.

Knopfler said there was a man working there dressed in a baseball cap, work boots, and a checkered shirt delivering boxes who was standing next to him watching.

As they were standing there watching MTV, Knopfler remembers the man coming up with lines such as "what are those, Hawaiian noises?

Knopfler asked for a pen to write some of these lines down and then eventually put those words to music. 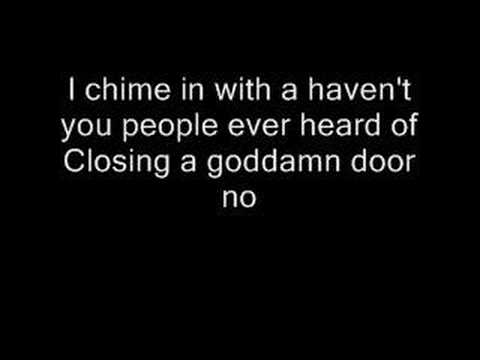 He describes a singer as "that little faggot with the earring and the make-up", and bemoans that these artists get "money for nothing and chicks for free".

We played him 'Money for Nothing' and he turned round and said, 'You've done it this time, you bastards. He did his bit there and then. I got an objection from the editor of a gay newspaper in London — he actually said it was below the belt.

Apart from the fact that there are stupid gay people as well as stupid other people, it suggests that maybe you can't let it have so many meanings — you have to be direct. In fact, I'm still in two minds as to whether it's a good idea to write songs that aren't in the first person, to take on other characters.

The singer in "Money for Nothing" is a real ignoramus, hard hat mentality — somebody who sees everything in financial terms. I mean, this guy has a grudging respect for rock stars.Lyrics to 'I Write Sins Not Tragedies' by Panic!

At the Disco. Oh, well imagine / As I'm pacing the pews in a church corridor / And I can't help but to hear /. Panic! At the Disco song lyrics collection. Browse lyrics and Panic! At the Disco albums. Nov 24,  · Billboard's YouTube channel brings you exclusive interviews with chart-topping artists, one-of-a-kind studio performance sessions and in-depth coverage of th.

I have been blessed with the opportunity to study abroad in Seville, Spain for a semester.

Panic! At The Disco Albums

After one month of living here, I've gotten over the initial culture shock . Lyrics to "Camisado" song by Panic! At The Disco: The I.V. and your hospital bed This was no accident This was a therapeutic chain of events This is.

Lyrics to "I Write Sins Not Tragedies (Acapella)" song by Austin Jones: Oh, well, imagine, As I'm pacing the pews in a church corridor, And I can't help but to hear No, I c.